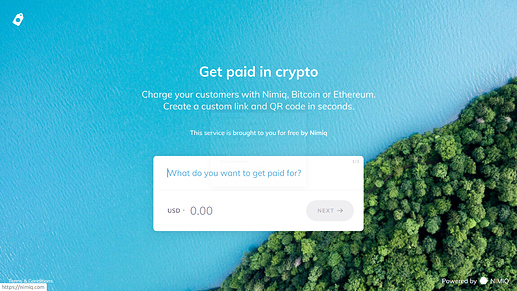 Nice! Maybe add a pop-up hint when a user forgets to fill the “what do you want to get paid for?” field so they know what’s up.

I’m maybe a little confused but I don’t exactly understand the intended scenario.

I think a little bit more explanation on the website itself would help.

I don’t think it’s intended for brick and mortar shops, but that feature might be added in a future version, or perhaps in a different app, and here are some possible requirements for the MVP of such app/feature. I’ll also be adding a little Figma demo with the UI and the app flow (when I get a chance

For what is it intended then? Because the link generation is purely manual and expires after 15 minutes once you clicked on it, it’s obviously not meant to be integrated on a small online shop or I missed something.

The cryptopayment link could be used for freelancers and service contractors that don’t have an online shop.

Oh I see, so it’s kind of an invoicing service. Still, curious to see the team expand on what they have in mind.

Thanks @Talleyrand. I changed the text in the post to make it more clear. I’m also going to share it here

What exchange rate has been used for crypto to FIAT calculation?

Rather than just using a particular average rate, it fairly calculates the amount of crypto it would need to buy the requested fiat amount by looking at the public order books across a few top exchanges.

Is the current rate available only from the server side, or is there a public RESTful API to get it from the client side? I’m asking because that would be very useful for a Nimiq point-of-sale app. Also, in some countries the LocalBitcoins average price would be a better approximation of the market price when buying the requested amount of fiat, so maybe in the case there is an API it could have a way to pick which exchanges to include in the rate calculation.

Some feedback for the front-end devs:

Being able to set up a request without conversion (directly in BTC, NIM and ETH) would be handy. After all you guys price your merch in NIM, why not let people do the same? Besides it covers a lot of potential issues (like if I don’t want to use the current rate for whatever reasons).

The features described in the “About” should be listed on the homepage imo, it’s simply unclear what the whole thing does at first sight to me.

You know the proverb “you can lead a horse to the water but you can’t make him drink”?
I think you guys are trying to force the horse’s head in the bucket making it mandatory to create a Nimiq account right now. It feels trappy from a user perspective.

I already explained my reasoning about why I dislike this part on the Telegram channel but I will insist because I believe it’s important.

In short: it’s easier to do outreach to the Bitcoin and Ethereum community without forcing them to create a wallet for a coin they don’t even own. Tribalism is strong in cryptos and the current setup is making it harder to push cryptopayment.link outside of the community.

For example you guys namedropped Andreas Antonopoulos as one of your inspirations for the service. If you go out there and have him try cryptopayment.link I think the the chances he will tweet about it are pretty low. Simply because he will think “oh, it’s a convoluted bait to make me try their altcoin” while if there was no forced onboarding he would be more likely to think “that was a really smooth Bitcoin app, let’s tweet about it and take a look at the other things those guys are doing”.
In the first case you get 0 exposure, in the second you get tens of thousands eyeballs on your work.

My opinion is that this nuance in terms psychological approach is crucial if you guys hope to make this successful.

Personally, I use Ethereum only for the gas needed in smart contracts and not as a mean of exchange or store of value. Also both Ethereum and Bitcoin have a terrible user experience. Things like trying to pick the right type of address to receive a transaction in Bitcoin (Legacy, Segwit, etc.), or whether to include or not the 0x prefix in an Ethereum address, to trying to setup a node in either blockchain all add up to an abysmal UX in my opinion.

However, unlike Bitcoin, Ethereum isn’t synonymous of blockchain and cryptocurrency. Many newcomers, if not the vast majority, come to crypto thanks to the Bitcoin brand. Even crypto-enthusiasts sometimes need to be reminded that Ethereum is the biggest platform for smart contracts nowadays. So, it would make sense that Bitcoin was added to Cryptopayment.link, since it will be added to the Safe too anyway. Creating a new Nimiq address wouldn’t be needed either, thanks to the support for HD wallets on the Safe.

As thinks stand, targeting only newcomers with Cryptopayment.link doesn’t sound as bad to me, since the user experience in Nimiq is far superior. It’s very unlikely that new onboarded users would want to use a different blockchain afterwards. As you pointed out, tribalism is a thing in the crypto space, so maybe more experienced users won’t be actively searching for ways to improve their UX anyway.

I think it Is awsome idea to have this program incorporated into nimiq I have not had no issues when tested it.