To connect to the Nimiq Network, both the Safe and Hub are including an iframe in the page from https://network.nimiq.com. This iframe starts a Nimiq browser node (client) that connects to the network. The Safe and Hub then communicate with this iframe client via RPC to update the users’ balances, listen for and send transactions. Both the Safe and Hub, and any other apps that use the Network iframe, create their own instance of the iframe and thus of the Nimiq client within.

To reduce the amount of Nimiq nodes running at the same time in a browser, and to avoid having to re-establish consensus in each Network iframe, we like to add a method of communication between iframe instances that enables sharing of consensus between multiple users of the Network iframe.

A promising idea is to use most browsers’ built-in Broadcast Channel API:

The Broadcast Channel API allows simple communication between browsing contexts (that is windows, tabs, frames, or iframes) with the same origin (usually pages from the same site). - MDN

Because the Network iframes are included from the same URL origin, it is possible for these iframes to communicate directly with each other via a Broadcast Channel.

New iframe instances would detect other, already running instances of the same iframe and would relay all requests to the iframe that already has consensus.

A deterministic means of communication between iframe instances in the channel would have to be developed so that no confusion is created as to which iframe sends and receives broadcast messages.

For ideas for cross-window communication and message formats, refer to the Nimiq RPC library: https://github.com/nimiq/rpc.

The RPC library can also be extended to support the use of broadcast channels, however to not increase the size of the RPC library for all other purposes, the channel communication library should maybe extend the RPC classes instead.

The proposal is completed when

How can we go about testing this? I’ve started my own fork of the repo at https://github.com/MatthewDLudwig/network

I have added a demo page for the Network Bounty in the source network repo (linked in the OP). This demo is meant as a starting point for testing network events and a balance-check method. You are welcome to adapt the demo to test more things!

The instructions to run the demo for development are as follows:

Thanks for your help! Spent the day testing and ironing out the bugs as well as adding new features. I feel that the bounty is complete and look forward to feedback:

Contribute to MatthewDLudwig/network development by creating an account on GitHub.

I’m very sorry the review takes longer than expected. But it’s not forgotten!
Just clicked the “demo” link and kept duplicating and closing some tabs… it seemed then that connecting to the “other tab’s consensus” stopped working at some point. In got stuck at this: 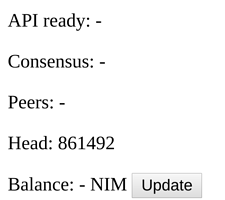 The console log show no errors, seems like it just didn’t get update messages from the “consensus host” (how do we call all this?

I was wondering about the time it took to connect through the other host - and also saw your comment in the code that the performance can be improved. Have you experimented with that? What would be realistic numbers? (3 seconds might be slower than just doing a new pico consensus)

Thanks for your work. Let me know if I can help or you need further feedback. FYI, I also tested it here: https://soundcode.now.sh - and I’d say it’s technically sound.

If you can find a surefire way to reproduce the issue you’re seeing I can look into it.

As for bringing down the 3 seconds, I experimented a little with it when originally working on it but nothing too serious. All I know is it can come down lower, no idea how low it can go.

Feedback for Chugwig’s implementation and the further work on it is now being tracked in this PR:

After your PR has been reviewed by Soeren @NimiqSoeren and Sebastian, the conclusion is that three aspects are not yet there:

So we see two options:

Of course we’d be most happy about option one.

Looking it all over I think I’d rather take the 3/4. Regarding the 3 aspects, I completely agree with them and expected as much given the amount of time I put in, my comments are:

Ok, thank you for your contribution, I’ll be in touch with you directly for the NIM.

Would be great if you can support us with getting the remaining work done and maybe also find the right person to continue your efforts.

Concerning the changes to the main post, why haven’t the criteria been updated? Idk how I feel about someone having to reach out to Team Nimiq in order to pick up and continue this bounty.

Seems like more of the same inability to let Nimiq as a project revolve around the community/ecosystem instead of around Team Nimiq.