Early Access to DevNet staking in the Nimiq Wallet

With Nimiq’s evolution to Proof-of-Stake now in the DevNet phase, we’ve begun to integrate staking into the Nimiq Wallet. While many features are still yet to be implemented, we thought it would be nice to share early access with our community to let you get an idea of how Nimiq’s next upgrade will look and feel.

Read all the details in the dedicated blog post.

The Wallet is running on the real deal, and your feedback is invaluable

The Nimiq Wallet is actually connected to a running network of Proof-of-Stake DevNet nodes currently managed by the Nimiq team. Nothing you see in the DevNet staking Wallet is a simulation. Sending NIM, staking, un-staking and payouts are real (in devNIM). Currently, our focus lies on running the DevNet under regular conditions. Security hardening will follow later. If you find anything that feels like a bug or have any suggestions for improvements, please post a detailed description of your feedback here (screenshots are appreciated).

Awesome! DevNet is sooo fast…
Some feedback - it would be great to stake with multiple validators, to take advantage of highest Trust Score and Highest Reward and payout in wallet or restake - or for any other reason. A super large whale might want to distribute more evenly to spread out risk and help support the decentralization of the network.

I think it too, it will be mind blow to select two validators, one for restake and another for wallet. I think that also small wallets funds with that option would be safer for same market changes.

First of all, congratulations on your milestone !!! After this news, I immediately started testing the DevNet. Now I have found some bugs that I wanted to communicate here.

Browser I used:
Chrome
Internet explore (not yet)
Firefox (not yet)

UX Bug 1: Mobile Samsung s22/Chrome:
In the video I made you can see I’m not been able to stake. It won’t let me send some Test Nimiq to the validator address/pool.

Won’t be able to see the whole stakingbar at once 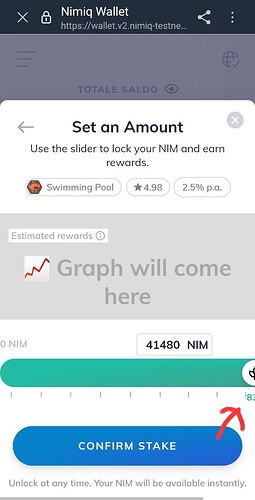 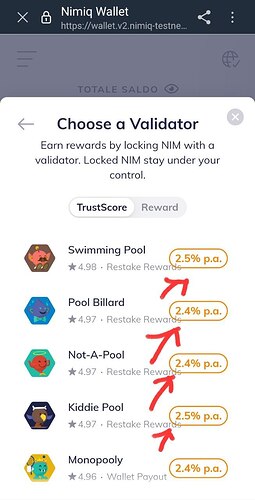 UI Bug 3: Mobile Samsung s22/Chrome:
The text is not in a line and runs into each other.

UI Bug 4: Mobile Samsung s22/Chrome:
The text is not readable perhaps the green strike area should be slightly larger. And for the rest I see some Dutch and English texts mixed up. But I am sure you were already aware of this 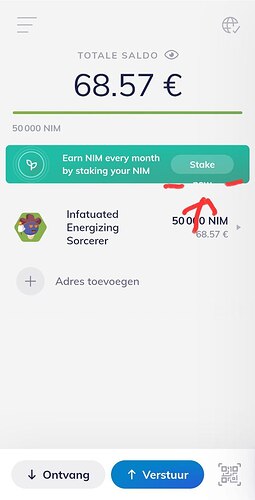 Great stuff team!
I had a look on my iPhone. Staking the 1st account was straightforward.
I then added a 2nd account and it took a little while to find out how to stake this account as the ‘Stake Now’ button on the main page is gone once you’ve staked the 1st account.
Suggestion: maybe have the stake option a visible button when you click into each account, rather than hidden in the account menu
Also, on the main page where you click ‘Stake Now’ it seems to only let you stake the 1st account. Would it be possible (if you have multiple accounts) to have this button visible unless you’ve staked all accounts, and then ask which one you’d like to stake?
Keep up the great work!

I’ve tried it for a few minutes and I am really, really impressed. I have been following this project since you first announced Albatross so it is really exciting to see your vision become a reality. Transactions are so fast I honestly don’t believe that there is a blockchain running and that the numbers are simply changing on my webpage lol

I am using Opera on desktop. This browser doesn’t work for mainnet so I thought it might provide a challenge. So far, everything seems in order. The only bug that I came across occurred when I staked some devnim; the transaction appeared in the history (a deduction to my balance) but there was no sign of it anywhere else; it was like it had been sent in a normal transaction: 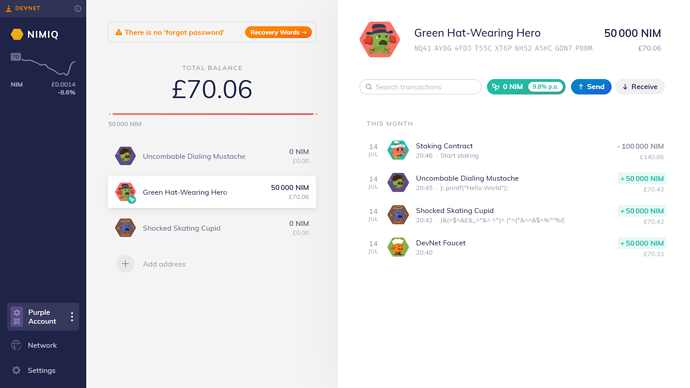 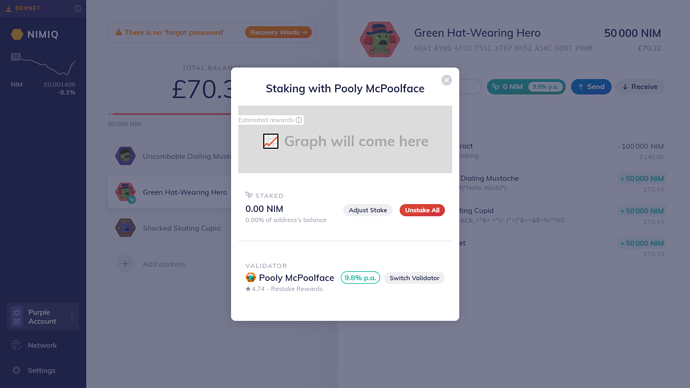 I thought this could be due to the epoch system but no amount of waiting resolved the issue. I was confused despite my know-how. However, if I refreshed the page everything appeared as normal, with staking amounts clearly displayed.

I know this is a bit of a nitpick, but I want this release to be absolutely perfect. The amount of effort and love your team has poured into this project means that anything but the very best would be a disservice! Good luck.

Screenshot_20220714-173523_Brave1440×2960 236 KB
So far the devwallet is a great progress. I understand that the devnet might be down here and there but I noticed the history of transaction for more than 24hrs shows as invalid with a x mark and a red line on the amount of Devnim transacted. The other thing i noticed when I changed validator the wallet froze so i just closed the Devwallet app and reopened it. I LOVE HOW FAST THE TRANSACTIONS COME THROUGH. I first tried the staking pool that gives the rewards in the wallet and saw a live rewards payout which i found amazing. I am currently trying the restake pool and will see how that works out. Awesome Job team

To me seeing -0 as value when switching validator feels weird. 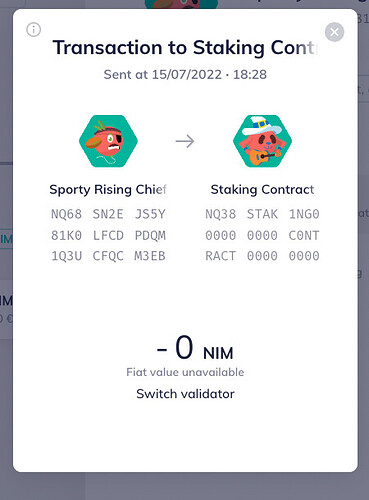 I have the same issue. I switch Validator from Cool Pool to Pooly McPoolface and I’m not seeing any rewards being shown. 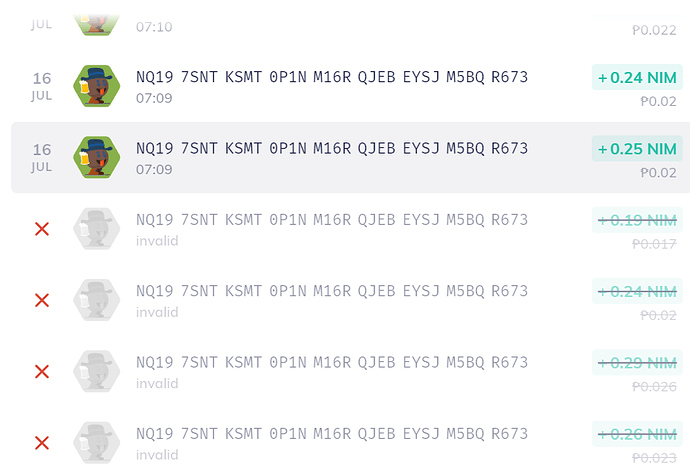 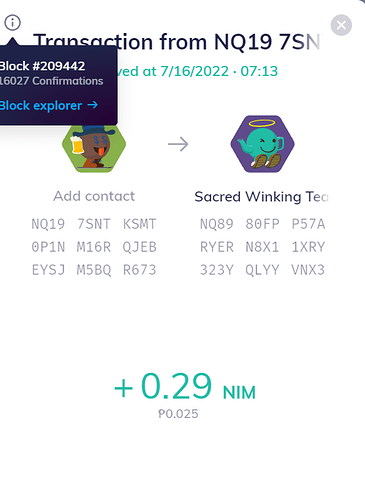 I also had instances of browsing freeze. When I interact too fast, it freezes for seconds, sometimes the tab crashes. 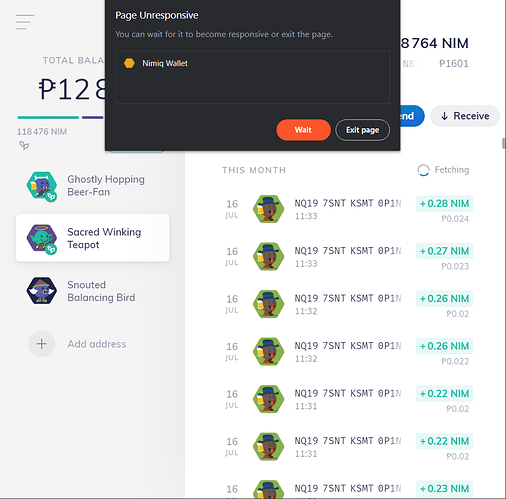 love the overall user experience. I will second the suggestion for allowing staking for multiple validators.

One suggestion for UI, when choosing your staking amount, the % indicator could be lowered. Currently, when viewing on desktop it overlaps with the vertical dashes. 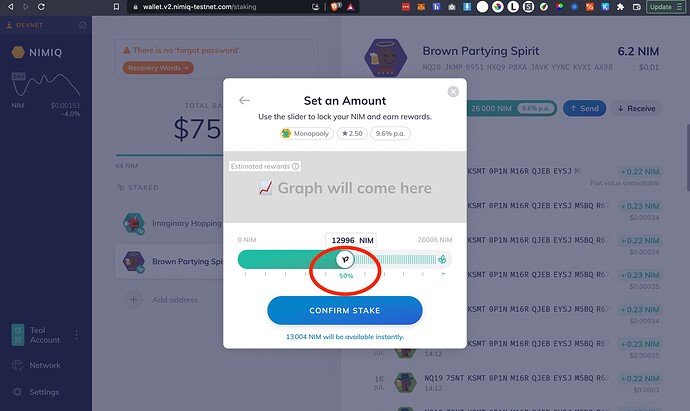 This could be beneficial for keeping the wallet less flooded with transactions and also a tax standpoint for when you take ownership of the crypto rewards. 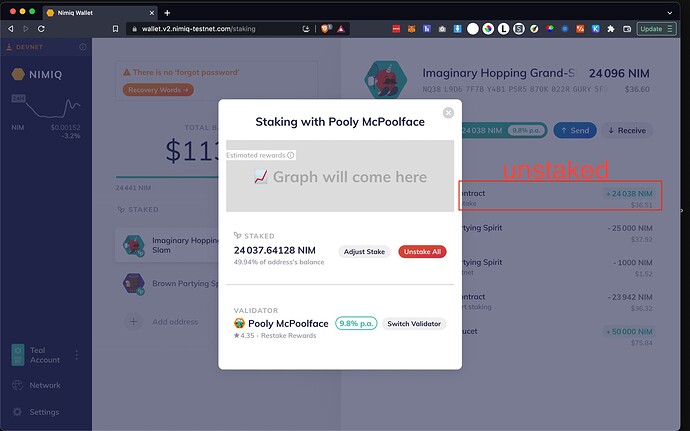 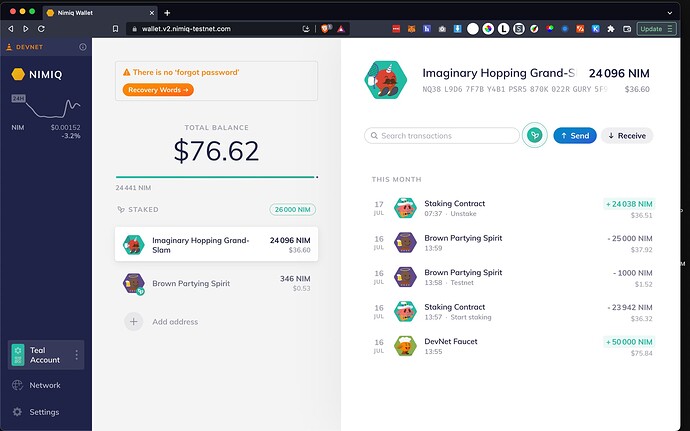 this is also showing in mine. i am unsure if this occurred before or after I unstaked and switched delegators.

After a day or so wallets with addresses that have NIM staked in “Cool Pool” or “Monopooly” and receive in-wallet rewards become mostly unresponsive - on mobile smartphone or on desktop.

Ctrl-Shift-R (in Chrome browser) is usually needed to refresh the wallets.

With wallets that have multiple addresses, as some suggested, in order to stake with multiple validators the wallets are even worse off. Switching between the staked wallets goes into fetching mode and wallets freeze. Also, if a wallet is fetching and eventually up to date, after switching tabs for a few minutes will make the wallet frozen again when switching back to the wallet tab. 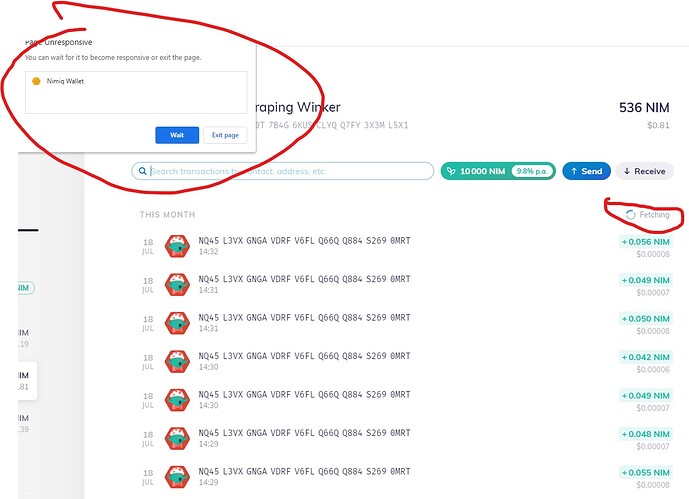 I’ve noticed that after having the Wallet for a while it suddenly becomes frozen. Can’t even open Chrome Console and eventually a pop appears that the tab got stuck.

I have noticed that in normal chrome it locks the wallet, but in chrome incognito tab it works fine

the same happens in the edge browser

Cool Pool disappeared?
Monopooly is not paying out staking rewards, it seams.

It’s not clear what rewards are being paid by the pools. Some addresses show a growing balance with Monopooly some have an unchanged balance. When changing a validator, somehow a few NIM are added to the account. 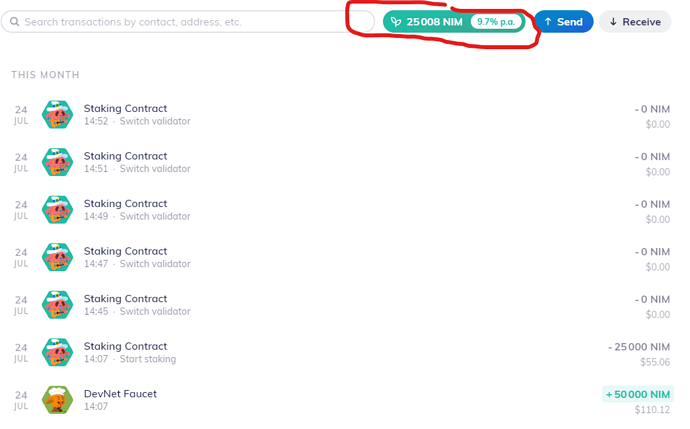