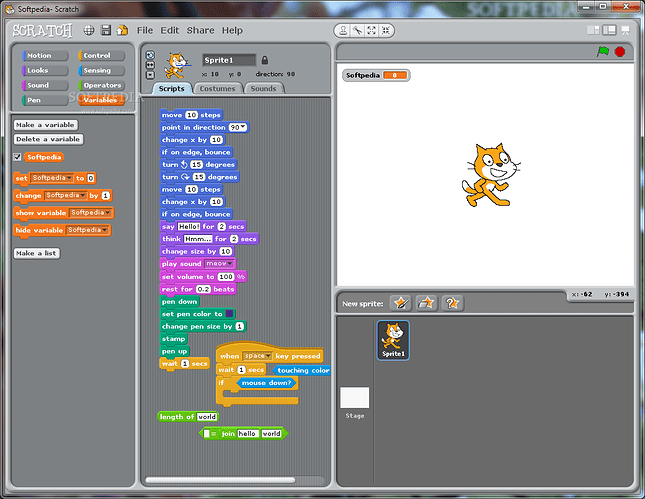 Building a Nimiq-powered web app is easy - this rate of easy, I mean if you know intermediate Javascript, this would be a bit walk in the park. Tutorials are there. App starter kit is there, yes, they’re only waiting for you to build one. However, in my experience, without refined skill on web development, it would take time to realize your ideas without doing much research on implementation.

To make this easier and more Nimiq’s vision, a plug-and-play app builder similar to MIT’s Scratch would be great not only for those not familar with programming but also for people who has an idea for business but can’t translate it to code.

Big fan of making it as easy as possible to integrate Nimiq! Personally, I’m skeptical about visual programming (what’s shown in the screenshot) - IMO, it’s for kids and not realistic for, say, programming a wallet application - it’s actually more effort to drag&drop than to code. Still, making sure that Nimiq can be plugged in easily is very important and I think we can still improve there. Soeren and I already spoke about that and will happily dedicate time and effort towards more tutorials, good libs that do most of the heavy lifting and stuff like that after Nimiq 2.0 is released.

There is also Blockly, I proposed the idea a while back, and I’m glad more people think something like that might worth a try.

Visual programming tools are used in game development (level design, character animation, shaders, game logic), so that people that are not coders can put together some functionality without having to ask to a coder to program said functionality.

In the case of a Nimiq library for visual programing tools used in game development and alike, I don’t think designers would want to be messing around directly with transactions or blockchain consensus. Those functionalities would be rather for coders to integrate, in a similar way than they would for instance for PayPal or a credit cards payment processor.

What I had in mind was more like adding a few blocks to Blockly (or Scratch) for kids to have a way to interact with a blockchain directly from their creations, and even get a few NIM in the process, you know, from parents and friends that want to encourage them.

Woahh, yeah I tried Blockly in my class before! Great proposal! On top of Blockly in my class, this could also be beneficial to educational sector since blockchain technology will have position on industries, related jobs will be in-demand as ever. Extending this as part of my proposal on using Nimiq as tool for education.

I agree. Visual programming is almost too accessible: if someone can’t even code without resorting to blocks then they shouldn’t be trusted to build Nimiq apps that handle people’s money.

In the case of Nimiq for Blockly or Scratch, keep in mind that kids using those tools have already been trusted by their parents or teachers with an iPad or desktop computer. Some of them even might have experience selling cookies door to door or at a lemonade stand. The only thing they don’t have access to is a bank account… thus enter Nimiq

I think a no-code platform support would be more usefull